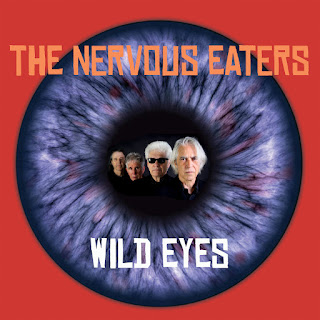 Boston punk legends Nervous Eaters used to open for bands like the Ramones, The Police, and The Pretenders, and they're still kicking around almost five decades later. Their new single, "Wild Eyes," may not quite have the fire that their 1976 song "Loretta" has, but who hasn't slowed down over the last forty-six years? "Wild Eyes" is more power pop and garage rock than punk, and maybe even going into adult contemporary territory, but when a song is done this well, that's hardly a bad thing. This just old fashioned 70's style rock 'n' roll done by a group of guys that started out in that decade.

"Stevie Van Zandt chose Wild Eyes' as the first single from our new album Monsters & Angels. A textured, melodic rocker that paints a portrait of a beautiful, complex woman who views life through the lens of her sophisticated imagination."

You can watch the video for "Wild Eyes" below. Monsters & Angels is due out this Fall on Wicked Cool Records. For more on Nervous Eaters, check out the band's website.