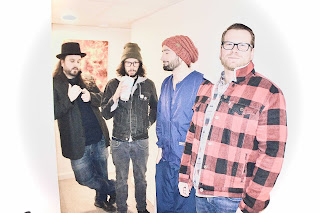 Boston's Sunshine Riot have written one of the most earwormy songs of the year with "Just Say So." The alt-rock/grunge band have slowed things down a bit and are letting their Replacements influences fly high on this one. This is alternative rock from back in the days when it was college rock, and besides The Replacements, this one is going to make you think of other bands from the era like The Posies and Galaxie 500. "Just Say So" also brings in some of the killer power pop of a band like Cheap Trick, so there's more than a lot to love with this one.

"'Just Say So' is a song about writing songs. More specifically I think it's really about the healing power of music, trite as that may sound -- I believe in it. As we've gotten on in years as a band, I've come to appreciate just how therapeutic writing and playing songs is for all of us."

You can listen to "Just Say So" below. Sparkle Baby 2000 is due out on September 9. For more on Sunshine Riot, check out the band's website.