With holidays the next two weeks and a slow release schedule, this will be the last First Listen of 2014. I'll be back with the first week of good new releases in the new year.

Still, we do have one high-profile release this week: 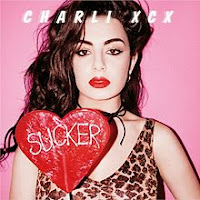 Charli XCX - Sucker: Charli XCX has had a pretty good year, with her work on Iggy Azalea's "Fancy" and "Boom Clap" from The Fault in Our Stars, and this follows her production work with Icona Pop to boot, so she's keeping herself busy. Still, her first release in the United States didn't wow me, and so I went into Sucker with a little bit of caution. It wasn't necessary, though, because it's really a solid pop album from start to finish, with a lot of rock-solid, radio-ready tracks to go along with some interesting deeper cuts. You should listen to this anyway, but with new music being somewhat rare at the moment, it's worth putting into the rotation.
Posted by Jeff Raymond at 5:30 PM