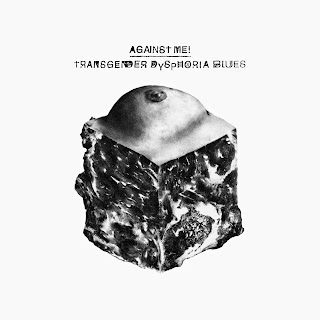 Against Me! is generally not the kind of punk rock I'm into when I want to listen to punk at all. With the big story surrounding Against Me! over the last couple years being around lead singer Laura Jane Grace's gender transition, the fear is that, like many other non-musical attention given to musicians and bands, that the music takes a back seat. I know I fired up Transgender Dysphoria Blues in part due to my curiosity as to how the band adjusted to the attention and the situation at hand, and not only does the album title pretty clearly demonstrate that they're not afraid to tackle the topic head-on, but it ends up being one of the most raw, most emotional, and most honest albums of recent memory.

The opening title track is one of the best songs on the album and wastes no time addressing the elephant in the room, and the album continues to go full-force from there, not letting up at all until the very last minutes (where "Black Me Out" is also a standout track). Not all of the album is talking about what everyone else is talking about, though, and that feels like a conscious choice to not be defined by it (which, as a reviewer, makes it kind of difficult to not point out). Still, they've made a fan out of me in a number of ways I didn't expect. This album was in constant rotation for me for months, my favorite songs on here still end up being some of my favorites of this year, and I am very excited to see where they'll go next. Maybe it will be back to the harder punk rock I can't get into, maybe we're seeing a further evolution into a more mainstream pop-punk, but the exposure they've gotten and a high-quality album that pulls no punches surely doesn't hurt in terms of bringing on a larger fanbase, and I can get behind that.

You can stream the album below.

Email ThisBlogThis!Share to TwitterShare to FacebookShare to Pinterest
Labels: against me!, Jeff Raymond, jeff's best of 2014