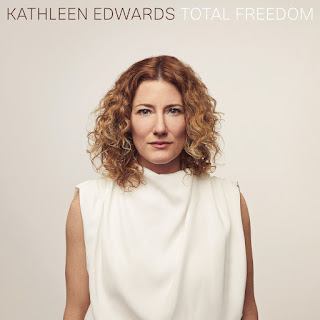 I can't be objective about Kathleen Edwards.

I tripped up on Kathleen Edwards shortly after her debut album, Failer, came out in the United States with a profile in the Boston Globe featuring a promo photo of Edwards collapsed in the street among some beer bottles. Pitched in a way as a sort of foul-mouthed alt-country successor to Neko Case, I fell in love with every song on that album, saw her at TT the Bears, fell in love with every other album she put out, saw her in New Hampshire, and waited impatiently for her to become the next big thing.

Then she quit music and opened a coffee shop.

If you've been keeping up with this blog for a while, rarely a month goes by in my weekly new release posts where I don't toss out the idea of an artist filling that Kathleen Edwards-shaped hole in my musical heart. Some have come close, but it's never fully happened. Rumors of her reentering the studio have floated around for a while, but yesterday marked her first release of new, original music since 2012.

"Options Open" is billed as a song for a former love that becomes a song for loving yourself, and I have to say: after eight years off, Edwards hasn't lost a step. The song feels right at home in the In State/Asking for Flowers era, and has the exact addicting, heartbreaking style that Edwards perfected and no one else comes close to. She's a master storyteller whether it's about a fictional criminal who'll end up on the evening news or with something more autobiographical, and this song deserves to be added among her best efforts.

I'm glad she's okay, and I'm glad she's back. Her new album, Total Freedom, is due out in August via Dualtone Records (it's not an empty threat), and the lead single can be found below.